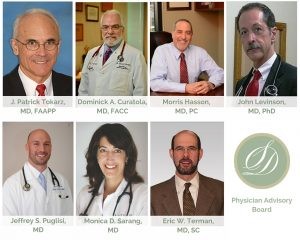 Recently, we announced the formation of our new Physician Advisory Board, chaired by Chief Medical Advisor J. Patrick Tokarz, MD, FAAPP. As the Specialdocs network continues to grow, the Board will offer their considerable expertise in both the clinical and business side of concierge medicine.

At Specialdocs, we are thrilled to receive insightful feedback from the Board as we seek to improve and expand upon our existing services. Together, we’ll explore new technologies and best practices while working to enhance the overall delivery of concierge medical care.

Learn more about each Board member below:

J. Patrick Tokarz, MD, is Board certified in Family Medicine. After more than 30 years at Northern Virginia Family Practice, Dr. Tokarz retired from practicing medicine in December 2014. He earned his undergraduate degree from Stanford University, medical degree at the University of Tennessee, Center for Health Care Sciences in Memphis, and completed his Family Practice residency, followed by a teaching fellowship, at Hershey Medical Center. Dr. Tokarz has received numerous awards during his career, including Best Doctor in America (2005-2010) and Top Doctor Recognition (1995, 1997, 2010, 2011, 2012). He serves as a clinical professor at George Washington Medical School and at Georgetown University Medical School.

Dominick A. Curatola, MD, is Board certified in internal medicine with subspecialties in cardiovascular disease and interventional cardiology. Currently he is a concierge physician in Mountain View, CA, following many years in traditional private practice. Dr. Curatola has served as medical director at Norma Melchor Heart & Vascular Institute, chairman of the Cardiovascular Service Committee of El Camino Hospital, and president of the Board of Directors at El Camino Hospital District in Mountain View, CA. Named one of America’s Top Cardiologists in Interventional Cardiology by the Consumer Research Council of American in 2007, Dr. Curatola was also selected by peers to receive the Top Doctor Award by San Jose Magazine (2001-2007) and received the Lange Medical Publication Award. He earned his undergraduate degree from Yale University, medical degree from New York University School of Medicine, served his residency in internal medicine at The John Hopkins Hospital, and completed a fellowship in cardiology with the Yale University School of Medicine.

Morris Hasson, MD, has practiced as a concierge physician since 2012 in Aliso Viejo, CA. Dr. Hasson earned his medical degree from University of Illinois and completed his residency in internal medicine at University of California, Irvine. He was a Clinical Professor in UC Irvine’s Department of Medicine for 15 years and served as an internist at Long Beach Internal Medical Group for six years. Dr. Hasson was medical director of the Weight Management Program at UC Irvine and at The Center for Effective Weight Loss and Lifestyle Change in Aliso Viejo.

John Levinson, MD, is Board certified in both internal medicine and cardiovascular disease. In 2001, he established AllCare Medical, the first concierge practice in New England. In 2005, Dr. Levinson opened the Levinson Harris Medical Group, a practice dedicated to internal medicine and cardiology. He has been a member of the cardiac unit at Massachusetts General Hospital (MGH) and a faculty member of Harvard Medical School since 1989. Dr. Levinson was a founding board member of The American Society of Concierge Physicians, now the American Academy of Private Physicians, and remains an active participant in the organization. He earned his undergraduate degree and a PhD in genetics from Stanford University and his medical degree from Stanford Medical School. Dr. Levinson completed internal medicine training at the Hospital of the University of Pennsylvania and fellowship training in cardiology at Massachusetts General Hospital.

Jeffrey S. Puglisi, MD, Board certified in Internal Medicine, is a founding partner of Glenville Medical Concierge Care, located in Greenwich, CT. Dr. Puglisi’s specialized clinical interests are in men’s health and cardiovascular disease prevention. He also participates in ongoing presentations on behalf of Boston Heart Diagnostics. As medical director of Caring Hospice Services, Dr. Puglisi managed home hospice care in Fairfield County. He has served as President of the Greenwich Medical Society since 2006 and was recognized as a finalist for the Melville G. Magida Humanitarian Award in 2010. Named a Castle Connolly Top Doc in Fairfield County in 2015, Dr. Puglisi earned additional recognition this year as one of the Leading Physicians of the World by the International Association of Healthcare Professionals. He was named one of Concierge Medicine Today’s annual ‘Top Doctors in Concierge Medicine’ for 2016, a distinction held by less than one percent of physicians across the country each year. He earned his undergraduate degree from Franklin & Marshall College, medical degree from Hahnemann University School of Medicine, and completed his residency in internal medicine at Mount Sinai Hospital in New York, where he served as chief resident.

Eric W. Terman, MD, a personal physician located in Chicago, IL, specializes in internal medicine. He earned his undergraduate degree from Harvard University, medical degree from The Pritzker School of Medicine at University of Chicago, and completed his residency at University of North Carolina, where he served as chief resident.

The post Inside Look: Specialdocs Physician Advisory Board appeared first on Specialdocs Consultants.

Specialdocs Welcomes Two New Members to the Physician Advisory Board

‘Special Doc’ Jeffrey S. Puglisi, MD Joins the Board of the American College of Private Physicians